Here are the songs we played at our “Nova Social Happy Hour” at 116 Bar on Friday, March 2:

For Any Inconvenience Track-by-Track Commentary

David: Walking down Smith Street in Brooklyn and seeing an entire block of mom & pop businesses in transition mode, the title came to me, double entendre and all.
Thom: A number of vintage drum machines converged on this one to give David’s inevitably funky guitar riff a satisfactory home. The last time we employed a guitar synth in this manner there were serious repair bills as a result; tricky signals were handled with much care (read: vodka tonics) this time. Some of David’s swoopier string parts are a loving tribute to arranger / RAH Band founder, Richard Hewson.

David: I don’t want to give too much away about this song. OK never mind: The narrator’s “exception” is Kate Winslet and the subject’s “exception” is Scott Paterson from the band Sons & Daughters. The plot is definitely very “Escape (The Pina Colada Song).” I can only assume this was the song Jon Langford was thinking of when he said For Any Inconvenience was “perverse.”
Thom: When David played his initial demo of this one for me I remember pretty much shouting “This is the first song on the next record.” I was close. I spent a good deal of time trying to make guitars sound like keyboards on this track, but the spooky string part is the standout.

David: Or maybe Jon was thinking of this one.
Thom: This track was in the incubator for quite a long time. When inspiration struck it was usually after listening to a bunch of freestyle records. So thank you, Exposé.

David: “The Star” is inspired by the novel W, or the Memory of Childhood by the brilliant experimental author Georges Perec, which contrasts an athletic, youth-based dystopian society with Perec’s remembrances of growing up in Paris during the spread of Nazism and the Holocaust. I never thought I would ever write a song about Judaism, but here it is.
Thom: If ever there was a ‘last song on side 1’ this is it. A few of the lyrics in this one fuck me up immediately upon contact. I keep my cool during live shows by pretending I’m Donovan.

David: Everyone asks if this is about the South Beach hotel with the same name, and the answer is yes.
Thom: This is as close as we’ve gotten to good old sitting-across-the-table-from-each-other songwriting; sitting-across-a-couple-of-bridges songwriting? (I picture a different hotel in my head when I listen. Don’t tell David.)

David: The narrator of this song works a desk job, perhaps in sales. He lives outside the city limits of an industrial metropolis like Detroit (this may have led to mating the lyric with the Juan Atkins-influenced track). It’s after 2am on a weeknight, the guy is driving around near the river, and he’s in a really bad way.
Thom: I’d be perfectly happy if the loud part at the end went on for half an hour. Perhaps there’ll be a remix in which it does. Also: Xavier is awesome.

David: The seed for this song was planted when I saw the stark photos of Mike Tyson’s abandoned Ohio mansion that showed up online. Then it came to fruition after a friend told me about a wedding at a Renaissance Faire that culminated in a joust. I brought that scenario into the boxing world, where our former champion is brutal, tragic and dying for love.
Thom: A fabulous excuse for me to make an awful lot of noise on a guitar, I usually have to muffle some cackles of joy while playing this one live. Oddly danceable, especially if you dance like Pig-Pen from Peanuts.

“Drunk at the Prom”

David: I did not have a particularly good time at my senior prom. Nursing a broken heart at the time, my two main memories are the interminable picture-taking sessions that occurred on various front lawns and backyard decks and then later in the evening, looking out the window of the limousine while sulking. That said, my prom wasn’t this bad.
Thom: Mine was pretty neat, actually.

Download for any inconvenience from iTunes, eMusic, Amazon or here.

Posted on November 16, 2011 by David
Posted in Uncategorized, videos | Leave a comment 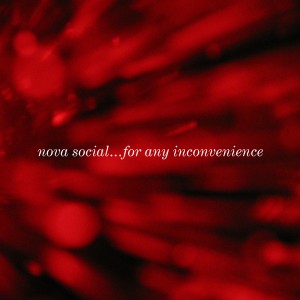 Posted in For Any Inconvenience, recording | Leave a comment

As Thom and I were finishing the recent Nova Social EP, we realized there was one major problem with all the songs: they simply weren’t long enough.

In the tradition of Arthur Baker, Tom Moulton, etc., we created our own extended remixes of several of the songs off the EP. Here’s our first offering for your listening and downloading pleasure — the extended remix for “Held.”

We will release three more in the next month or two: “I Want You Bland,” “(When She Was) The Other Woman” and the over-the-top and over-10-minute “Now You’re a Nun Suite.”

We first worked with Yianni in 2000 while recording our first full-length album, The Jefferson Fracture. Yianni seemed to inhabit an entirely different musical and cultural world than we were situated in — most of his projects were dance-pop or hip-hop, when he wasn’t working on Greek pop records that shipped triple platinum.

It was friend and composer David First who recommended Yianni. They both did the bulk of their recording using Logic Audio, which David had been schooling me in for a couple years. But Yianni also had a 24-track 2″ tape machine, which was the format we had been recording TJF in.

David contributed to TJF in a number of capacities and Yianni’s basement studio in Astoria became our NYC locale. We recorded David’s theremin, eBow guitars and meticulous saxophone arrangements (played by Michael Blake and Ulrich Krieger) there.

David also composed synth loops for the song “There There,” which contained all sorts of strange counterrhythms — there were patterns that consisted of 11 or 13 beats over the course of 4 bars. And though we recorded the song to a click track, we neglected to lay down a SMPTE track for MIDI synchronization (though with the amount of vocals and other crap we put on the song, we wouldn’t have had space anyhow). As we started transferring the synth loops that David created in Logic to the 2″ tape, they would slowly become even more off time than they were supposed to be.

So, in one late night session, we watched Yianni in action. Fueled on these amazing iced coffees he made, he would start the synth loops and “punch in” the 2″ tape machine, rolling until the loops got out of sync and then starting over again, sort of like how Johnny Marr’s guitar intro to The Smiths’ “How Soon Is Now” was accomplished. (“There There” is up for download here.)

This is Thom’s and my greatest memory of Yianni. He was a sweet guy, very generous and complimentary of others’ talents, but he also relished the opportunity to show off his abilities, which were many.

I hadn’t spoken to Yianni in five or more years, though I meant to get back in touch with him after David told me that he was still around, and they had been working on a new Notekillers record together.

Sadly, Yianni died last week at the incredibly young age of 42. Seeing his two young daughters at his funeral in Astoria yesterday was truly heartbreaking. All I could do was walk up to his casket at the end of the ceremony and offer my thoughts:

Posted in recording, The Jefferson Fracture | Leave a comment

I got in touch with engineer Godfrey Diamond in the fall. I spent last year listening to Bionic Boogie’s “Hot Butterfly,” a song he co-produced in 1978 with his brother Gregg, at least once a week. It’s a beautiful song (one that would be covered only a few years later by Chaka Khan), with incredible arrangements and a jaw dropping vocal performance by Luther Vandross.

After a very fawning e-mail introduction, I met with him on an October weekend afternoon at his home studio in Prospect Heights. He told me some great stories about the late 70′s, including one about getting vinyl lacquers pressed of rough mixes, bringing them over to Studio 54 that night so the DJ could spin it and then finishing the mix based on how the crowd reacted.

Thom and I convened at Perfect Mixes for two sessions, one in January and one in February. 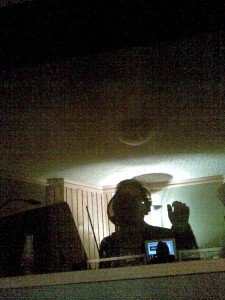 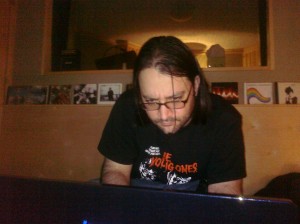 In January, I recorded lead vocals on three Nova Social songs in the works: “The Exception,” “Leave Me Alone I’m Fine” and “The Star.” 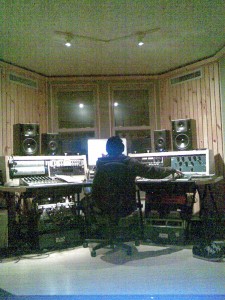 Last week we got together with a trio of string players, helmed by Tom Chiu of Flux Quartet (along with Rachel Golub on violin and Alex Greenbaum on cello). We recorded strings on nine songs in five hours. The songs are: 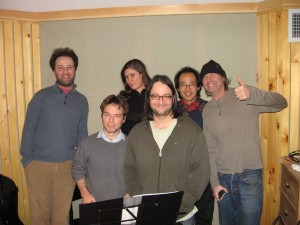 (Plus, our new blog went up just as Blogger announced they would no longer service blogs on FTPs — what amazing timing.)

Posted on September 7, 2009 by David
The lyrics and basic melody for “Style Over Substance” date back to early 2002. A very rough demo was recorded in Logic maybe around six months after that. 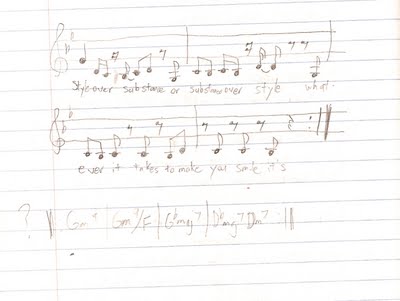 It took us about five years to finally finish it, but when we returned to it in early 2007, Thom and I were surprised at how much we still liked it.

Musician, DJ and bearded expat Tim “Love” Lee posted “Now You’re a Nun,” the first song off of the forthcoming Nova Social EP, on his blog. You can listen to the track and even participate in some sort of mildly democratic voting experience.

And speaking of the new record — this is it!

It is tentatively scheduled for release on Big Sleep Records in late-September on vinyl and digital download (in which case, it’s all one-sided). Entertainment!!

Posted in blogs, Nova Social EP, Now You're a Nun | Leave a comment